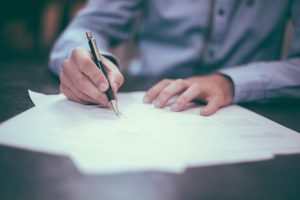 A contract signing
When individuals or businesses document transactions by signing contracts, it is usually hinged on the understanding that the exchange of promises entrusts some obligations on either parties.

A breach of contract is the failure of a party to a contract to fulfill or perform his obligations in a contract.

When a party fails to perform the obligation as promised under the contract, he is said to have breached the terms of the contract.

When a contract is breached by one party, the other party is left with some options to alleviate injuries that might be suffered.

The first option is to call the attention of the erring party to the breach and to seek amicable resolution via Alternative Dispute Resolution Mechanisms. In this instance, the issue of breach is sought to be resolved without the intervention of the courts via mechanisms such as negotiation, mediation, arbitration or any other means that does not involve a complete court process.

The second option is to sue the breaching contract in order to enforce the contract. This option is called litigation.

In litigation, the non-breaching party can apply for any of the following remedies:

Damages: this is a payment awarded to a party against whom a contract is breached. Damages could be compensatory, punitive, nominal or liquidated.
Specific Performance: this is only granted by the court where Damages is not sufficient as remedy. In this case the court gives an order to the breaching party to perform some obligations under the contract.
Restitution: where the non-breaching party has done or refused to do an act that gives some benefit to the breaching party, the non-breaching party may apply for restitution. Restitution means that the parties are restored in their original statuses before the congregation. This is only available where the parties can be restored to their statuses before the contract.
This blogpost seeks to shed some light on what to do when faced with situations when a party to a contract fails to fulfill promises made in a binding agreement.